It’s time for a new Crows’ Bones tour. The band will rehearse in Leeds for some
days and then give six performances in the UK. It will also be possible to buy the CD,
official release in April 2014.

Have a look at the homepage and the tour plan.
Listen to “I saw the dead”

During the fall, Niklas was asked by the  Eric Sahlström Institute to arrange some of Eric Sahlströms compositions. Five of the songs have been arranged for children’s group, from almost beginners to those who played a little longer. The idea is that the arrangements to be used in teaching eg music schools around the country.
Niklas has also organized three songs for ESI All Time Band, a big band consisting of former and current students at ESI.
The premiere of the events took place on Oktoberstämman in Uppsala on October 26.

In the county of Hälsingland you can read about folk music regularly in the local newspaper!
Read the article (if you understand Swedish) about Niklas, about the new Ahlberg, Ek & Roswall CD and about Crows’ Bones in Hela Hälsingland. 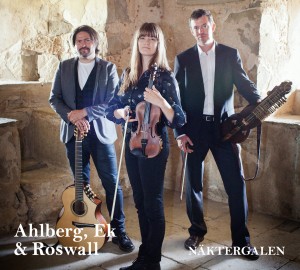 Saturday the 12th of Oct is the day! Then Ahlberg, Ek & Roswall will release our new cd, Näktergalen.
Release and concert at Linköpings Folkmusikfestival, start 11 pm.
Hope to see you there!
Listen to previews from ”Näktergalen” here.